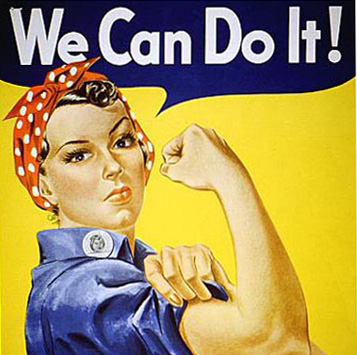 This week at Whiteboard Worldwide Headquarters, Ruth and I have been thinking about Women and Leadership, particularly with respect to training.  I have to be honest that my first thoughts were, “Why would women need Leadership training that is any different than the training we would offer to men?” I hated the thought of saying that women needed something different or special – to us leadership meant building relationships, coaching your team, developing and executing in a “one-size-fits-all “strategy.

The literature and media I looked at seemed to emphasize that women need more training, whether it be in order to debunk  media’s presentation of “stereotypical” women and their roles, or to add some additional skill-sets that would make women more successful. I reached out to a few feminist women in my circle who hold leadership roles, and was overwhelmed with their excitement and passion on the topic – but I still wasn’t convinced.

“Part of the hesitance to embrace powerful women is embedded in feminism itself,” says Buzzfeed’s Anna North. “Feminism is a movement founded on women’s status as a marginalized group,” North writes, “and as a woman moves closer to the centers of corporate or government power, she can come to seem like, for lack of a better word, the Man.”

Could I agree with this? I’m not sure!

My government leadership experiences have all been peppered with a wide array of women leaders, many of whom were stellar strategists and coaches, and seemed to kibosh any and all barriers to women being successful in leadership.  I have been fortunate in my career to have these leaders to guide me to take on leadership roles and excel in them.  So my experience makes it hard for me to say that women are treated differently than men in the workplace.

But how do others feel?  Do women need to learn how to react, mitigate, and respond to situations where they are being treated differently? (Click to Tweet)

This week, Ruth and I delivered some “executing on strategy” training to a team of 30+ engineers (95% male) and my mindset changed a little.  Talk about a tough crowd. My inner-self was torn between being my best, teaching the material that I knew was great in the ways I know how – and running out of the room to have a nice cathartic cry.  Wow. I don’t think I had ever experienced that before, and it was alarming to me. Did I have to win over this crowd because I am a woman? Was it because I’m not an engineer? Were there other reasons? I don’t really know. To be honest, my biggest issue is that I cannot prove that any of those reasons was the culprit. So many questions, so few answers.

While I still have questions and a lot to learn about the topic, I’m going to start this series of blogs on Women and Leadership with the concept of like-ability.

Do women prefer to be likeable over successful?

Do I need to be affirmed to feel successful? Ruth and I had a retreat last winter – and we learned that we feel the most satisfied about our work when we receive positive affirmations – either from each other, our clients, or especially training participants.  It made us re-focus our strategic plan on training in 2014 – because we like that feeling and want more of it.

To quote Jessca Vallenti – to be driven by this like-ability – “means that your self-worth will always be tied to what someone else thinks about you, forever out of your control.”

So I actually knew things were in fact in my control.

My ability to relay the content to the participants and get them to “get it” (or “grock it” as Ruth would say), was completely in my power. My ability to comprehend their engineering examples and summarize and repeat them would improve my credibility, would get me to understand their world, and would ultimately get them on board.

But is that unique to me? Is that some skill that I have that other women don’t? And if so – WHY?

Now, I think we did turn the course around and reach the curious and open side of that group of engineers, and we saw success.  I’m still considering the concept of how much they liked me in my mind – and how that impacted me.

It’s still early in my research, and I  have a lot of work to do to solidify my views, however, I did learn a little about myself in that room.  Most importantly I wondered if I could harness that learning and help other women . Am I a feminist yet? Stay tuned for this series in Women and Leadership to find out more.

Do you have thoughts on women and leadership? What concepts do you think a leadership course on women should have?  Comment below or send us a Tweet @whiteboardcons with the hashtag #womenleaders.

3 thoughts on “Women and Leadership”