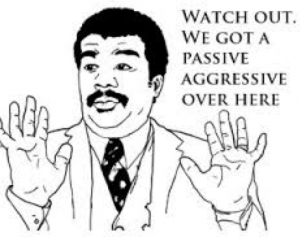 People love throwing around the words “Passive Aggressive”.  But what does it actually mean? Is it just a style? Is it bad? What are the repercussions of this style?

I had used the term before, and thought it was a way of exerting an aggressive emotion or feeling, but doing it in a nice way.  I never really saw it as a negative thing.  In fact I often categorized it with the ever so typical Canadian “Sorry.”  Someone bumps into me, and I say in that heartfelt Canadian accent “SOOrrry”.  Am I just super nice and subservient? Or instead of telling someone they are are jerk for bumping into me, am I hoping that jerk will feel bad that I said sorry (unnecessarily) and actually apologize to ME?

First let’s describe what this type of behaviour is:

Passive Aggressive behaviour is typically categorized as someone who expresses negative emotions in a seemingly positive manner.

If these sound familiar, you may have a passive-aggressive on your hands.  People with this behavior dislike expressing emotions honestly or confronting situations.  Often this cam be traced back to childhood where it may have been inappropriate to articulate dislikes and likes honestly.  Instead they please the audience with their words in an affirmative way (this is the passive part) and add behaviours (usually non verbal ones, like facial expressions) that seem to conflict with their words (this is the aggressive part). This behavior is very confusing to recipients who are hearing one message, and witnessing or experiencing another one altogether.  (Click to Tweet.)

While this behavior is sometimes categorized as abusive, controlling, and manipulative – we take the approach that this is a habitual learned behavior that the PA may not be aware they are exhibiting (or the impacts it may have on recipients). Also, PA’s are good at this – and they see success (namely not having to confront) so their inclination is to keep doing what they’re doing. If we use our kindness and curiosity we can identify their fears, insecurities, and concerns and create a safe environment to express their emotions directly.