The internet is a funny thing, as I’m sure you’ll agree. Lately it’s been buzzing on whether a dress is white & gold or blue & black, creating two firmly opposed teams, taunting each other with the ridiculousness of their “clearly incorrect” choice.

Here’s the image of the dress: 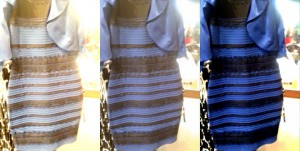 At first I thought it was just a silly thing, and those saying blue & black were doing so just to be difficult and to feed the social media beast. I didn’t get it. It’s so obviously white and gold.

Then I did some research, and came across an interesting article from Wired.com. (It appears there is actually science to it!) Apparently, it is actually blue & black (!!), and the reason some people see it differently has to do with the context and the way their brain is wired to choose between the two by discounting “irrelevant” light. (You can read the full article here.)

So, in essence, it depends on your perspective, doesn’t it.

Isn’t that true of everything?

Why This Is Important to Managers

Yesterday I taught a course on The Essentials of Management for the Centre for Leadership & Learning in the Ontario Public Service. One of the things we talk about is the importance of perspective, or context, when managing people. Your job as a manager is to ensure that YOUR context is not incorrectly influencing the way that others will hear a message or interpret instructions.

Every manager has had that moment of shock when he/she realizes that they just said or did something that had the complete opposite effect from what was intended. They thought this “thing” was white & gold, and their team interpreted “blue & black.” The results were disastrous, and it took some finesse and time to recover.

There are a couple of basic areas that we all need to be highly sensitive to when trying to be most effective and impactful with our employees:

Finally, let’s not forget that the best teams are made up of all kinds of different contexts. If you see white & gold and some of your team sees blue & black, isn’t that a good thing? Surround yourself with those who are different, and embrace and discuss that diversity! Your contextual awareness will expand, your awareness will be richer, and you will be a better manager.