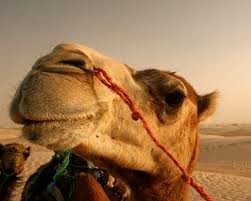 What? You’ve never heard that expression? Neither had I, until a colleague introduced it to Nicole and me. Apparently it’s an old Arabian proverb that goes something like this:

If the camel once gets his nose in the tent, the body will soon follow.

It’s a metaphor describing the belief that seemingly innocent actions can lead to larger (and unwanted) consequences – if you a allow a camel to slide his nose under the edge of a tent, pretty soon he will work his whole body under it, and you’ll have a big hairy smelly (spitting!) beast in there who won’t leave.

So what does that have to do with process improvement in businesses? Plenty.

Recently, a client told me “I don’t think that what we need is so much of a process change, but a culture change.” Although he actually needs both, he raises an excellent point. You can modify and improve processes all you want, but if the culture doesn’t shift to embrace and commit to those changes (versus simply complying), then all the work you put into those improvements is likely going to end up wasted. Click to Tweet

Remember when we quoted Peter Drucker and said that Culture Will Eat Strategy for Breakfast? It’s the same thing… your process changes are like your revised strategy, and your organizational culture must be aligned in order to ensure the improvements can be realized.

A lack of accountability to process changes is the thin edge of the wedge, or “the camel’s nose.” Allow slippage with respect to process adherence, and you are begging for trouble. 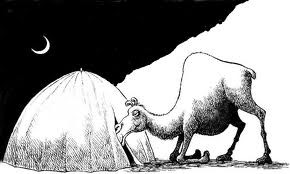 Three Things to Do to Avoid Process Slippage

Have examples of camels’ noses at your office? Share it with us! Give us a shout via Twitter @whiteboardcons using #betterfastercheaper or email us at info@whiteboardconsulting.ca/staging.