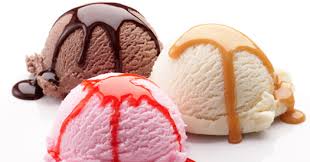 If you work for anyone other than yourself, you have probably lived this phrase in some way:

“Ugh – this new initiative is nothing other than the new flavour of the month. It’ll never stick and next year they’ll roll out something else.”

Sound familiar? These words have probably assaulted your ears (or crossed your lips), when the organization is trying with best intentions to make a change or an improvement. The person who is responsible for the change is excited about the initiative, and is frustrated beyond believe with this blasé response from the team.

So why do people say it?

First, a little Change Management theory for you – we know from Dr. Elisabeth Kubler-Ross‘ work that people experience grief in an emotional roller coaster. When Kubler-Ross pioneered the concept of the 5 Stages of Grief, people became aware that grief impacts us all the same way and yet differently too.

In other words, we all go through the stages of Grief (Denial, Anger, Bargaining, Depression, and Acceptance), but we may go through them differently. Some may linger in one stage or another, and some may fly through a stage so quickly as to appear to bypass it. The way in which we go through these stages is greatly impacted by our personal resilience, the amount of stress we are dealing with at the moment, and our experiences with grief in the past.

The same is true with change. In fact, Kubler-Ross’ model has been adapted to create the Change Curve, used by Change Management experts, teachers, and coaches. There are several different variations of the curve itself, and we like this one the best: 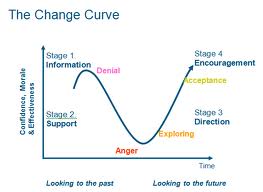 You can see the similarity to the 5 Stages of Grief – in this model we have Denial, Anger, Exploration, and Acceptance.

Imagine then, an employee who is not only experiencing change at work, but also at home (spouse has been demoted, child has moved out, parent is ill). This employee, we’ll call him Rob, has been a good worker and has been around for about 15 years. You are Rob’s manager, and very excited about a new program to create a more efficient process for doing the work of Rob and the entire team. When you meet to discuss it, Rob breaks open the “Flavour of the Month” remark, and the team snickers.

This is because Rob has been around for a couple of business cycles. He’s seen change implemented, re-implemented, de-implemented, and implemented again. He’s tired and his resilience is low – he feels that change is a pendulum, and that people should just make up their damn minds and stick with something.

The United States’ National Bureau of Economic Research states that since 1945 the average business cycle has been just less than six years. That length of time may also be impacted by your industry, budget issues, technology advancement, and general business trends.

So in other words, every few years the business world changes. And in order to be relevant in that world, an organization must change with it. The change the organization is implementing is probably the right thing, for right now. In a few years it may no longer be the right thing. So yeah. It might well be the flavour of the month, and there’s nothing wrong with that (unless an organization is making change for change’s sake – and that’s a whole different discussion.)

The trick is to implement the “new flavour” carefully, using change management best practices from the outset and communicating the “why and why now” message in the most effective way for the team.

If that’s all done correctly, then the answer to Rob is as easy as, “Yes Rob, it IS the flavour of the month. It’s chocolate. And it’s good.”

« How to use process tools for anything. Even moving!
The Process of Managing Change »