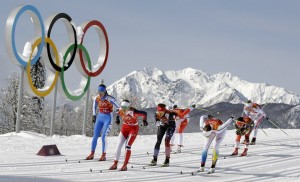 When you are really and truly a process geek, as I am, you are fascinated by processes everywhere you go. Whether it’s standing in line at airport security or waiting for your latte at Starbucks, there are opportunities to make things Better, Faster, and Cheaper everywhere you look.

There are also great processes that catch your eye and cause you to geek out, just a little bit.

Case in point. The Olympics.

No, not the overall Sochi experience, which I’m sure would be an AWESOME process improvement case study. No, I mean the athletes’ approach to perfection.

One of the important concepts that we teach when working with clients on process improvement projects is that of consistency. In fact, we go so far as to say “Variation is evil!” (Click to Tweet) (It’s a strong statement, but it’s easy to remember.)

I was watching the Ice Dancing earlier this week and was interested to hear the commentator speak about variation when referring to some of the skaters. Common phrases included “they struggle with consistency”, or, “she’s had trouble repeating this routine”.

Famed Canadian skater Brian Orser won both the short and long programmes in the ’84 Olympics, but did not take the gold because of his poor performance in the then-compulsory figures. Back then, consistency was a critical element of judging skill, because it showed the ability to consistently master the basics. (Side note: I find it odd that “figure” skating would eliminate the need to show skill in compulsory “figures”, but I’ve given up figuring out the judging components. Anyway.)

There’s a commercial on right now in which a skiier sits on the chairlift at night and as he travels up the slope you hear him reciting in his head what he has to do in order to have a good run on the course; “Turn one, knees down, cut the edge. Turn two…” You can believe that most athletes do the exact same thing every time they approach their event – consistency is key!

Eliminate the Variation. Then Focus on Improvement.

So how do you apply this to your processes at work? First, focus on improving consistency. When you can do the same thing, over and over again, it becomes much easier to then improve the performance.

Picture a bullseye with shots all over the place. Then picture one with shots clustered off centre, but all within a few centimetres of each other. It is much easier to teach the consistent biathalon athlete to shift her aim than it is to help the varied biathalon competitor understand what she’s doing wrong (and differently) each time.

You just know that the winning biathlete is saying the same things to herself every single time she takes aim. She has a process, and if she’s hoping to win gold, she’s following that process Every. Single. Time.

The same is true for you at work. Make your office the gold standard of efficiency by eliminating the variation and focusing on the process.