It is possible that the title of this blog only resonates for those who live in the Greater Toronto Area. It’s also possible that with social 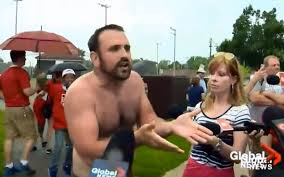 media and the global popularity of Rob Ford, that others are now familiar with the awesome Shirtless Jogger. But for those of you who aren’t, let me explain…

Toronto’s famous/infamous mayor, Rob Ford, returned from his stint in rehab this past Monday, June 30th. The next day was July 1st, Canada’s 147th birthday, fully of parades and flag waving and fireworks and BBQ’s and… a shirtless jogger.

At a parade in the Toronto neighbourhood of East York, 35 year-old Joe Killoran, a local teacher, experienced his 15 minutes of fame when he confronted the Mayor with questions to which Torontonians (most of them, anyway) want answers. Mr Killoran was out for a jog, it was a hot day, he was shirtless, he was bold, and the media captured it here.

Toronto Twitter exploded with the hashtag #ShirtlessJogger, and the national media picked it up and ran with it – the Globe and Mail called for more Shirtless-Jogger-Brand Outrage in Toronto.

That got me thinking…

How Can We Have More Shirtless-Jogger-Brand Outrage at Work?

Of course it’s not ok to shout and yell at work, and it’s probably not a good idea to be shirtless unless you’re a lifeguard. But the sentiment behind Mr. Killoran’s actions is that he was fed up and he wanted to be heard, so he saw an opportunity and did something about it.

One of the characteristics of office group behaviour is the tendency to agree with things when around a conference table, and then immediately dismiss or bad mouth them as soon as the meeting is over.

Have you ever seen someone do that? Have you seen groups of people chat away in the break room, complaining about something that was just announced, or about a change that is coming? Were they all nodding and supportive, or refusing to ask questions, while it was being announced? Did anyone actually do anything about it? This is classic passive aggressive behaviour, and it’s not only unhelpful, but can be destructive to office morale and productivity.

This is where the Shirtless-Jogger-Brand Outrage is required.

You can be the person to break the cycle of negative groupthink by being constructive, thoughtful, and open to discussion. This is your chance to openly question, present your concerns, and confront questionable (or seemingly questionable) actions in a thoughtful and helpful.

Once you decide to ask the questions and address the issues, remember that your leaders will appreciate your points much more if you:

Great leaders at all levels have an obligation to constructively question decisions in an open and respectful way. Once those discussions are complete and decisions are made, then the show must go on. Click to Tweet If there is no moral objection to the direction, then we must not only proceed with that direction but support it. Or we leave. It’s that simple.

Be a leader. Be the Shirtless Jogger and inspire change. Then tell us about it.

« The Top 6 things your Boss should know about you!
When To Be a Bitch at Work »