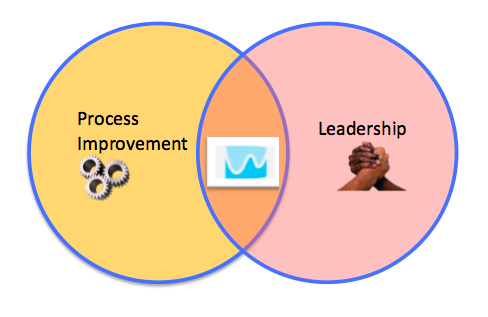 “I thought you did process improvement,” said my friend.

“We do,” I responded, stirring my decaf soy skinny mocha (new fave drink, for those keeping track).

“But you just taught a course on Coaching, and another on Executing Flawlessly.”

“Yeah, and?” I was sure there was a question in here, but wasn’t clear yet on what it was.

“I don’t get it. What do those have to do with process improvement? That’s process mapping, and finding efficiency, and statistics. You’re talking about leadership skills in those other courses.”

Ah, the lightbulb came on. And my first thought was, “Really? Isn’t it obvious?” My second thought was “Ruth, don’t be rude. Clearly this is not as obvious a concept as you seem to think.” In fact, most people Nicole and I talk to are not quite sure how to explain the niche that Whiteboard Consulting has carved for itself.

“Hmmm,” I stalled for time as I gathered my thoughts. “OK, you’ve done some process improvement at work, right?”

“Well, we’ve only done a little bit. My boss is trained in Lean Six Sigma and has been teaching us a little at a time. It seems ok, but it takes a really long time to implement and most of us don’t have the time to dedicate to it. It’s crazy, because Sherri, my boss, clearly loves this stuff but has trouble explaining it to some of the people who are more cynical. We’ve got people with 30+ years of experience, and you can’t tell them about changing the way we do things when the processes work just fine for them. And it’s so involved! I mean Lean has all these steps that you have to do, and meetings, and charts – people don’t have time for it all, and so the ideas they come up with just don’t stick. I really don’t get it. No offense,” he added hastily.

“None taken,” I said. “What else do you know about process improvement?”

He thought a minute while he chewed his blueberry scone. “To be honest, not much. I know that a buddy’s company tried to implement Six Sigma and spent a ton of money on training and then ditched it after a year. But I also know that there are people who are successful at it – I mean, you and Nicole have obviously had great experiences or you wouldn’t be doing what you’re doing.” He shrugged. “I don’t know why it works for some and not for others.”

“Think about it this way,” I began. “If your boss could do one thing differently to make her process improvement efforts more successful, what would it be?”

“One thing? That’s hard because there are a bunch – she needs to be able to actually explain why this process stuff is necessary, and put it in the language we’ll all get. And that’s not easy because we all come from different backgrounds at work. And then there’s the time to get things done and the tendency to allow things to just slide by. No one has the time, so stuff gets dropped and there are no consequences. Why should I kill myself over something if no one really cares enough to hold me accountable? The whole thing is inconsistent and so it just doesn’t stick with people.”

“Right, so if your boss was better able to coach you on what needs to be done, communicate why it needs to be done, understand the cultural resistance for how it’s being done, help people make time for the work, and hold people accountable to their tasks… that would make it successful?”

“For sure. Absolutely. But you’d have to teach her how to… oh… I see what you did there. Nicely done.”

We both laughed. “See,” I said, “so many of the more formal process improvement efforts require a HUGE investment in time and money, and companies take them on before fully assessing whether the organization is ready to change. They expect people to be thrilled to change their processes when first of all, they’re perfectly happy doing what they’ve always done, and secondly they’re terrified that process improvements will mean job cuts. Then everyone’s day jobs kick in, and draw attention away from what the goals were, and things slide, and it becomes this swirl of doom. Nothing gets done, and process improvement efforts get a bad name.”

“Swirl of doom. Did you just make that up?”

“Sort of, yeah. We also call it the vortex of insanity. Take your pick. But seriously – Nicole and I recognized this long ago, and set up Whiteboard Consulting with its own little niche: we are the company that teaches the initial steps of process improvement that prove themselves and start to shift the culture. We also teach the leadership components that are essential to supporting the success of the initiatives. You just can’t do one without the other. Well you can, I guess, but you’ll likely screw everything up.”

“Are you saying Lean Six Sigma is the wrong way to go?”

“No! No not at all,” I said quickly. “You know I’m a black belt in Six Sigma, and obviously I loved it or I wouldn’t still be doing it almost 15 years later. We just feel that those big programs are, for a lot – not all, but a lot – of businesses, too much, too soon. We teach the baby steps first, and if the culture is then ready for the big guns, then by all means, launch the formal stuff. Whiteboard Consulting’s sweet spot is where process and leadership meet.” (Click to Tweet)

“It does, doesn’t it. I may have to do something about that. Now enough about work, let’s discuss the season ender of Game of Thrones and whether Jon Snow really does know a thing or two after all.”